sofia palma, grew up in the suburbs of Lisbon, Portugal. among the outdoors, woods and the sea, the beach, cycling and camping, windsurfing.

2006 exchange year in Scotland, then a volunteer with AFS.

2010 dance classes with Paula Careto and an unfinished geological and mine engineering degree at IST, Lisbon.

2012 backpacking through Nepal, Australia and Denmark.

2012 - 2016 contemporary dance degree in Lisbon with an erasmus semester in the Vienna Konservatorium.

2018 - 2020 yoga instructor course at Centro Português de Yoga, with Carlos Rui. also working as a waitress and later, as a sea kayak tour guide, in Lisbon.

life model started in the Fine Art University Lisbon, in 2009. posed in ateliers/schools/artists in Melbourne, Vienna, Lisbon and Gent. 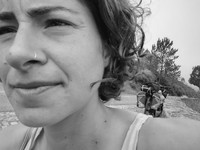